New York City FC have been drawn into Group A of the MLS is Back Tournament alongside Orlando City SC, Inter Miami, Philadelphia Union, Chicago Fire and Nashville SC.

NYCFC will face Orlando City, Chicago Fire and Philadelphia Union in their three group stage matches of the tournament which kicks off on July 8, with the schedule to be released by the league at a later date.

Stay tuned to NYCFC.com and our social media channels for news on the dates which will be posted as soon as confirmed by MLS.

Group stage matches will count in the 2020 MLS regular season standing and the tournament winner will earn a spot in the 2021 Scotiabank Concacaf Champions League.

Upon completion of the MLS is Back Tournament, MLS plans to continue its regular season with a revised schedule in home markets, followed by the Audi MLS Cup Playoffs and the 25th MLS Cup. The schedule will be developed at a later date. The final number of matches and the schedule for the remainder of the 2020 MLS regular season will be announced in the coming weeks.

Clubs will begin arriving in Orlando as early as June 24 for preseason training.  Clubs that can conduct full team training in their markets pursuant to the league’s medical and testing protocols must arrive no later than seven days before their first match.

Similar to a FIFA World Cup format, the tournament will feature a continuous schedule of matches nearly every day, with games beginning at 9 a.m., 8 p.m. and 10:30 p.m. EDT. The vast majority of the matches will be played in the evening.  Each team will play three group stage matches, and those results will count in the 2020 MLS regular season standings.

After 16 consecutive days of group stage matches, the top two teams from each group along with the four best third-place finishers will move on to the knockout stage. The knockout stage will include a Round-of-16, Quarterfinals, Semifinals, and the Championship match will take place on August 11. Matches tied at the end of regulation in the knock-out phase will proceed directly to a penalty kick shootout. Click HERE for the MLS is Back Tournament Competition Guidelines. 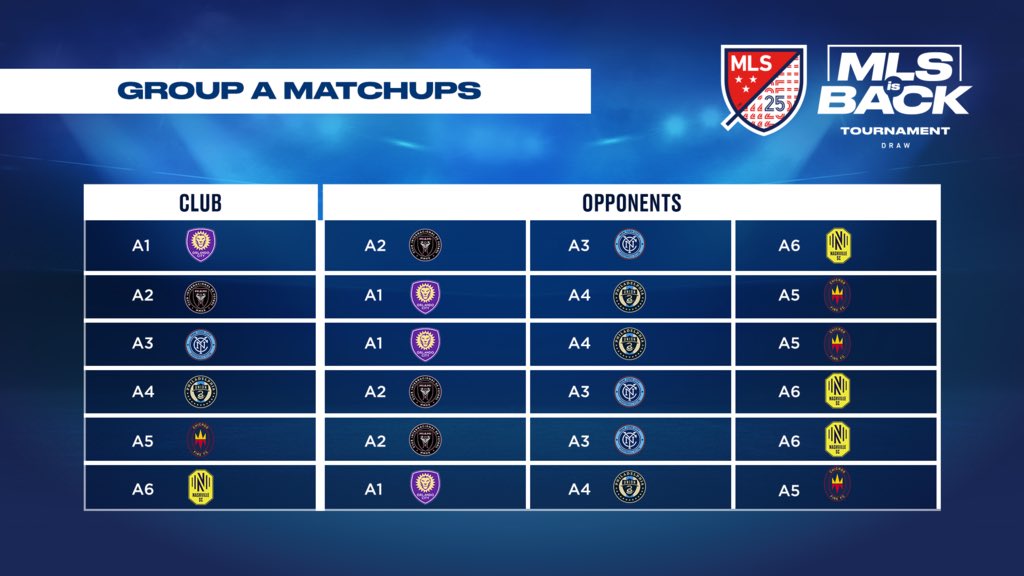 August 11: MLS is Back Tournament Final