New York City FC came from behind to win a dramatic Hudson River Derby 2-1 in front of 28,895 at Yankee Stadium.

Goals on either side of halftime from Maxi Moralez and Héber turned the tide for the Boys in Blue after Alex Muyl had given Red Bulls an early lead.

Despite a late red card to Ronald Matarrita, NYCFC held on and secured a deserved victory to move within a point of the Eastern Conference summit.

Following Atlanta United’s Friday night win over Orlando City, NYCFC came into this second Hudson River Derby of 2019 looking to close the gap at the top of the Eastern Conference to just one point.

Victories over FC Cincinnati and Columbus Crew SC had the Boys in Blue on a W streak but they faced off against a familiar rival in a derby match packed with intriguing subplots.

The first meeting of the season had ended 2-1 in Red Bulls’ favor in controversial fashion, giving City even more motivation to ensure that they secured a third-successive win and took the local bragging rights.

However, Dome Torrent’s side found themselves 1-0 down inside the opening 10’, after neat interplay between Kaku and Alex Muyl created the first goal of the night.

It’s fair to say it took the home side a little bit of time to get into their flow, but they soon warmed to the task, rattling the crossbar via Taty Castellanos’s header from a Ronald Matarrita cross, with Luis Robles beaten all ends up.

The woodwork was dented again on 36’ in even more spectacular fashion when Héber let rip with a missile of a volley from 30 yards, once again beating Robles but not the post.

Just when it looked like the visitors might escape to the locker room with a narrow lead, an incisive through ball from Alexandru Mitriță found Maxi Moralez who was bundled over by Murillo in the box for a penalty.

Maxi picked himself up and assumed responsibility, drilling his shot low and hard and into the back of the net to make it 1-1 just before the interval.

Going in at halftime, Dome will have urged his team to pick right back up where they left off and that’s just what they did, seizing the lead just seven minutes into the second half.

Anton Tinnerholm, arguably the best player on the pitch through the 90’, took up the charge down the right wing and delivered the cross for Héber who backheeled through the legs of Robles from an acute angle to make it 2-1.

It was the Brazilian’s 13th goal of the season and his second in as many games against the Red Bulls.

Sean Johnson was called into action on 66’ with a fingertip save from a shot from distance as the visitors tried to get back into the game, however City put up a big rearguard action, turning away anything Chris Armas’s side could throw at them and looking dangerous going forward.

There was a late scramble in the NYCFC box after Matarrita had seen red for an off-the-ball incident, but NYCFC were worthy winners and climb to second place in the East with a big Hudson River Derby win.

Man of the Match

The Swede may not have scored the goals to win the derby but he set the tone for this W, bombarding up and down the right flank all night long and flying into challenges like his life depended on it.

His assist for the night's winning goal was special too, finding Héber through the legs of a Red Bulls defender to win the day.

How We Lined Up 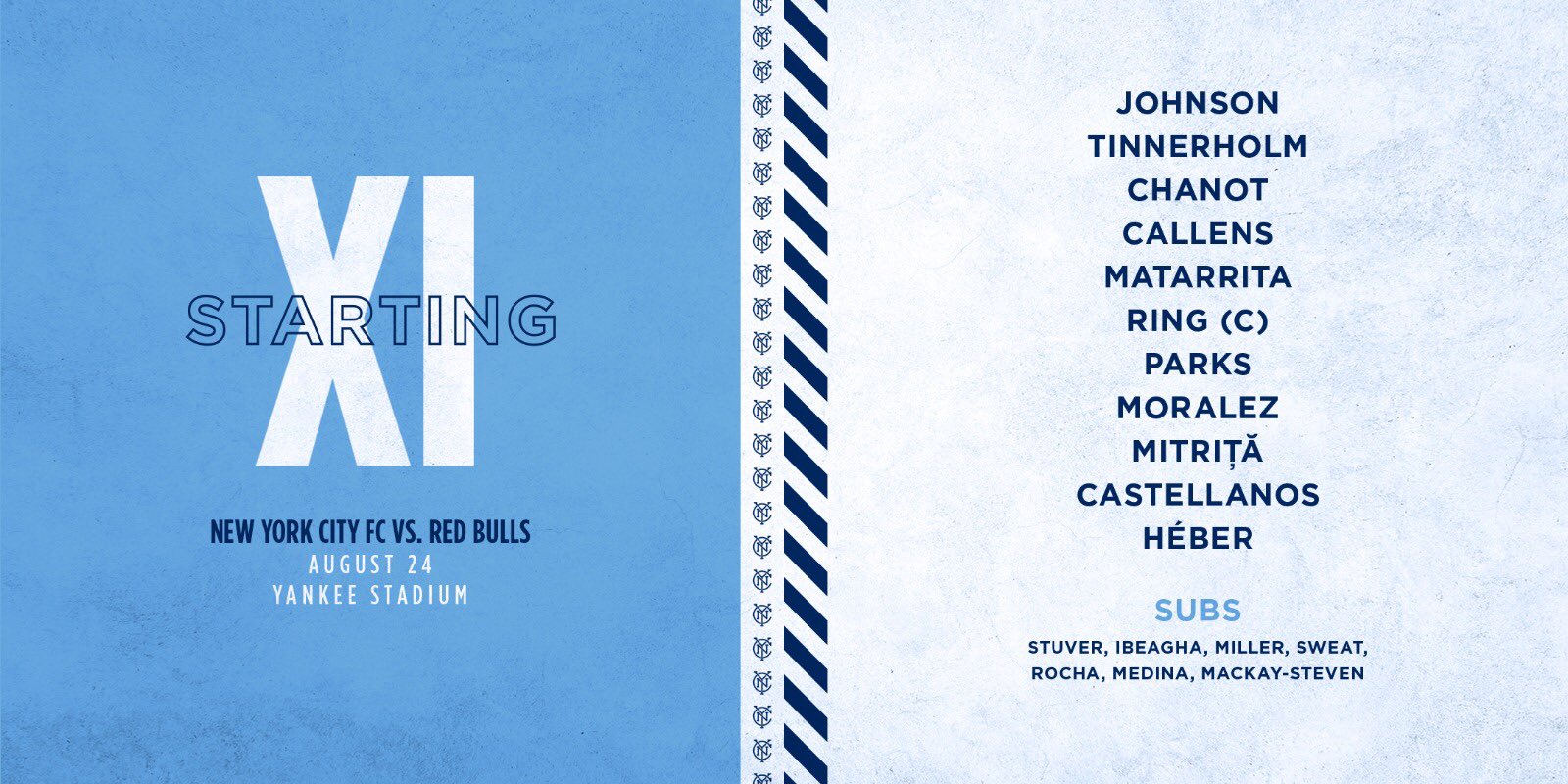 It's Vancouver next Saturday for the Boys in Blue who will look to make it four wins in a row and keep the pressure on at the top of the East. We're back in the BX on September 7 when New England come to town.