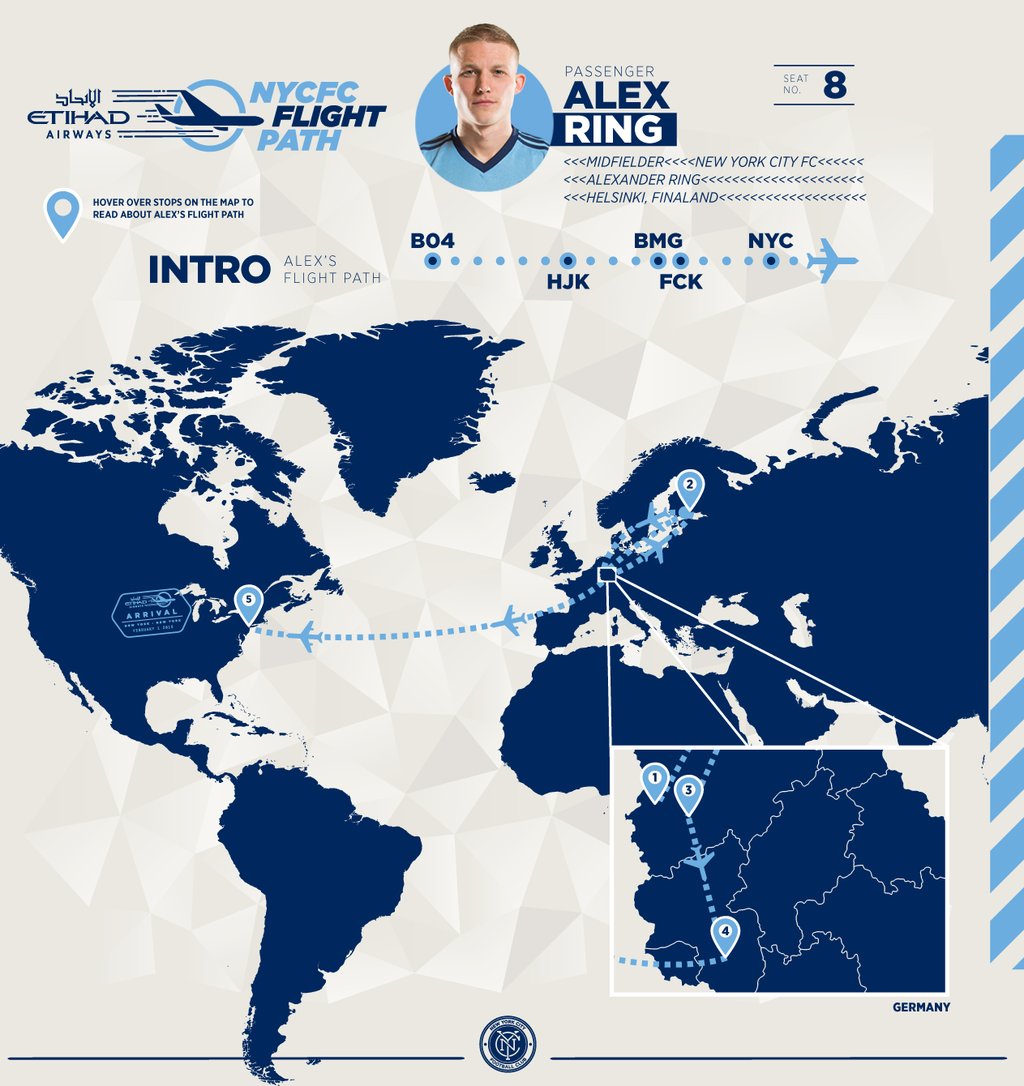 Finnish international Alexander Ring, who can trace the first decade of his footballing roots through the ranks of one of the biggest clubs in Germany, first rose to prominence at the senior level in his home country. After starring with Helsinki’s biggest club and amassing a handful of titles, Ring found himself back in the Bundesliga.

This past spring, Ring traded his Kaiserslautern red for City Blue, continent-hopping from Germany to New York City in search of a new adventure in the city that never sleeps.

Ring joined the youth teams of Leverkusen at the age of seven after relocating to Bonn with his family.

“Watching the World Cup in 1994 in the U.S., after that, I wanted my father to take me to play soccer,” remembers Ring.

“Since then, football has been my life.”

He was noticed by a Leverkusen scout while playing with a small local team in Bonn. From there, everything happened pretty quickly. He was soon jet-setting around Europe with his Leverkusen teammates, playing in prominent tournaments and experiencing the highest levels of youth competition.

“I played ten years in their youth system, and it was a fantastic time,” recalls Ring.

“I was travelling a lot with the team, playing against the top teams in Germany. I think it shaped me as a player and the person I am today.”

After progressing through the youth ranks of one of Germany’s most accomplished clubs, international football came calling for Ring.

“The national team coach at the time asked me if I was interested in coming back to Finland for the school system,” says Ring, “So I went there.”

“I met my wife there, got to spend some quality time with my friends, and then in 2011 I played for the first team of HJK.”

Success came almost immediately for Alexander upon his return to the country of his birth. Ring spent a season with HJK’s reserve side Klubi-04 upon arriving in Finland, scoring 9 goals in 32 appearances before breaking into the senior side.

From there, the accolades came thick and fast. Ring helped HJK to a Veikkausliga title in 2010, and a league and cup double in 2011, by which time he was a full-time starter in the center of midfield.

Ring remembers those years fondly: “We won the cup and the championship. I think we broke all records there were to break in a season. I got voted rookie of the year, which was really good for myself.”

At the end of that season, Finland’s brand new national team head coach Mixu Paatelainen called Ring into his first camp with the senior side. He made his debut in a UEFA Euro qualifying match against Sweden on June 7, 2011, beginning an ongoing international career that would—to date—span 44 appearances.

Ring parlayed his impressive performances for club and country into a move back to Germany, where he signed on loan from HJK with Gladbach.

After spending the first decade of his career in the youth leagues of Germany, he finally made his senior Bundesliga debut with the Nordrhein-Westphalia outfit on March 10th against Freiburg.

“The club was fantastic; it was a really nice time for me. I was 19 and playing with very big players like Marco Reus, Juan Arango, Dante,” reminisces Ring.

“It was my first time living alone abroad for me and my wife, we enjoyed it a lot.”

Following his two seasons on loan with die Fohlen, Kaiserslautern purchased Ring from HJK. He became a central figure in their continuing hunt for promotion from the 2. Bundesliga to the country’s top flight.

“We had big ambitions to go back to the Bundesliga. Unfortunately, that didn’t happen, but the atmosphere was pretty amazing,” says Ring.

Despite the disappointment of not making the jump up to the top flight, Ring flourished with Kaiserslautern, locking down a role as a full-time starter and facing off against some of Germany’s biggest players.

“I was there a long time—three and a half years. It was a really nice time.”

Ring would go on to make more than 75 appearances for the Red Devils even though he suffered from various injuries during his tenure with the club. The biggest of these came in October of 2014, when an injury to his right knee forced him to fight back from a long layoff.

Despite the adversity, Ring showed his resolve by returning as strong as ever. The midfielder chalked up 24 league appearances and six goals during that campaign, his highest goal total since 2010.

This past January, Alexander decided to leave Kaiserslautern to begin a new journey in a new environment. Twenty-five years old and married with two daughters, Ring saw an opportunity to start a new adventure and write his own history with NYCFC.

“I’ve been loving New York, the Club, and my teammates,” gushes Ring.

“The free time I have besides soccer has been amazing for me and my family. I love the restaurant culture here. It really is the city that never sleeps. You can do anything you want at any time of the day, and I think that is something you don’t have anywhere else in the world.”

Obviously, the sights and sounds of the city he now represents are something that Ring and his family have come to love. On the field, he’s just as happy.

He explains: “It’s been a real pleasure playing at Yankee Stadium in front of our home fans, the way they push us in every game. I think that has shown in the last few games. When we’ve gone down a goal we always come back.

“It’s a special bond between the team and the fans, and I look forward to playing in front of the fans every time. It’s very nice to play at home.”

This chapter of Ring’s career has truly brought him joy. He recognizes that chance to be with his family and live in the city he reps week in and week out is a privilege, and he’s enjoying every moment.

“It’s really been a joy the last few months,” he says. “I come every day with a smile to work, so I can’t complain. It’s, for me, fantastic.”

For a chance to win two tickets to Sunday's Playoffs game, retweet or share the NYCFC Etihad Flight Path posts on Twitter and Facebook - see this page for rules and regulations.