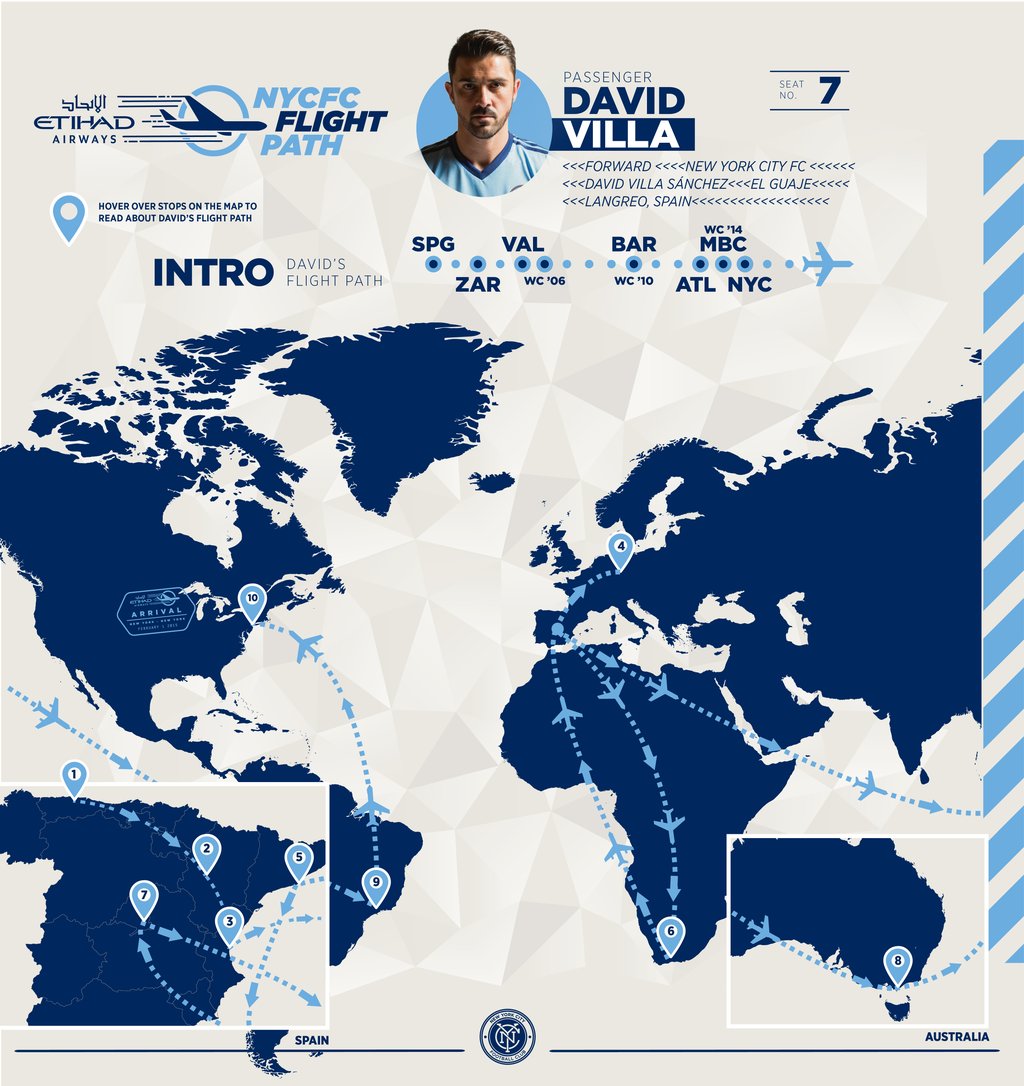 A man who has played for clubs on three continents and conquered the world with the Spanish national team has found a home in New York City, where he has consistently carried the Club to new heights, breaking records in his path.

To chart Villa’s NYCFC Etihad Flight Path, and to trace the steps he took that led him to New York City, we begin in Langreo, Spain.

Villa’s storied career began at the senior level with the millennium, but it wasn’t always clear that the striker was destined for greatness. When he was just four years old, Villa fractured his femur, an injury that threatened to end his footballing dreams before they even began.

Fortunately, his young legs made a full recovery, and the early adversity made him stronger. Soon, Villa was playing for the youth sides of local club UP Langreo, where his performances caught the eyes of several clubs in the Asturian region of Spain.

He signed for Sporting Gijon, located in the nearby city of the same name, where he would spend three years and score over 40 goals.

“I was always dreaming to, when I was a kid, play in the team of my town,” says Villa. “I played three years in the first team.”

Villa’s prolific performances with Gijon in the Segunda Division drew interest from several top-flight clubs in Spain, including Real Zaragoza.

The newly promoted Aragonese club needed to bolster their attack, and they chose David Villa as the man for the job.

“Zaragoza gave me the opportunity to play in the first division, in La Liga,” recalls Villa.

“We won two titles. It’s always difficult to win titles in Spain, more than ever with teams like Zaragoza. It was nice for us.”

Difficult as it may have been for a newly promoted side to find their way through the gauntlet that is La Liga, Villa showed no signs of needing an adjustment period. El Guaje scored 17 goals in his first top-flight season, and four more during the club’s victorious Copa Del Rey campaign.

Their domestic cup triumph gave Villa the opportunity to shine in the UEFA Cup in 2004, where he made an immediate impact. The striker scored a brace in his club’s opening match, a 2-0 victory over Dutch side FC Utrecht. He scored again in the second leg of the Round of 16, where Zaragoza would bow out to Austria Wien.

At the end of that season, Villa had amassed 15 more league goals, and it was time for another step up the ladder.

“Five years with Valencia gave me the opportunity to play in the Champions League,” begins David Villa.

“It gave me the opportunity to go to the national team, I scored all these goals, we won one title.

And why not? Those years were some of Villa’s most prolific in Spain. During his first season at one of Spain’s biggest clubs, he scored 25 league goals in 37 appearances. Three of those goals came against Athletic Bilbao—all within the space of five minutes. Between the 80th and the 85th minute of that match, Villa would break open a 0-0 game, notching a hat-trick for Valencia in stunning fashion.

The following season, Villa would make his UEFA Champions League debut. Villa’s five goals in eleven UCL appearances helped Valencia progress from the qualifying rounds, through the group stage, and eventually to the quarterfinals, where they were eliminated by Chelsea on a slim 3-2 aggregate scoreline.

The following season, Villa won his second Copa Del Rey, and on his 100th appearance for the club, he scored a hat-trick against UD Levante.

Villa’s time with Valencia also saw him make his first appearances with Spain’s national team. A strong season leading up to the 2006 FIFA World Cup saw him break into Luis Aragones’ 23-man squad. His three goals would help Spain reach the round of 16, where they would bow out to France.

Six goals for Spain during Euro 2008 qualification would be enough for Villa to earn his place in Spain’s tournament squad.

He would mark the occasion with another hat-trick against Russia in the group stages, followed by another goal against Sweden. In the quarterfinals, he sunk his penalty to help send Spain through to the next round.

Despite Villa suffering an injury in the semifinal and missing the final, Spain would go on to claim the title and Villa’s four goals in as many appearances earned him the UEFA Euro 2008 Golden Boot.

This was just the beginning for Villa’s international exploits with Spain. Now a cornerstone of the team, the man who almost had his footballing dreams stolen from him as a toddler was just steps away from the sport’s greatest honor: A World Cup title.

Villa would once again carry Spain through the group stages of a major tournament, scoring three goals in three matches. He followed up a brace against Honduras with the opening goal in a 2-1 victory over Chile, upping his total World Cup goal tally to six.

Impressive a feat as that is, it wasn’t where he would stop. He would score twice more along Spain’s road to the finals where they would go on to defeat the Netherlands to claim the title despite scoring just eight goals during the tournament.

Villa was now a world champion, and his remarkable international success would earn him yet another step upward on the club level.

Despite his immense personal success, it’s not his own goals that he remembers most fondly during his prolific two-year stretch with Spain.

“It’s the best thing I did in my career, to be part of these teams,” remembers Villa.

“The best memory was the final, when Iniesta scored the goal, and the referee took the whistle and gave us the trophy.

“It was the best moment.”

More than 35,000 supporters crowded the Camp Nou to witness David Villa’s unveiling as a Barcelona player.

“It was amazing, playing with one of the best teams in the world,” beams Villa.

“In three years, we won eight titles. It was very nice, very nice for me, and also a great opportunity to play with the best team in the world at this moment, and with one of the best players in the world, too.”

The picture of consistency, Villa would not disappoint those fans so eager to get their first look at their new striker. In his first season with the Catalonian giants, he would score 18 league goals, bringing his all-time scoring tally to an incredible 210 goals.

Villa added yet another title to his trophy case during his time with Barcelona, scoring the final match in their 3-1 victory over Manchester United to win the UEFA Champions League in 2011.

“Winning the Champions League, the final in Wembley, I scored a goal,” says the striker.

“It’s one of the great moments in my career, too.”

In the summer of 2013, after scoring 16 goals in the previous season, Villa would head to Atletico Madrid now fully recovered from a broken tibia that had nagged him for the better part of his time with Barcelona.

Fresh, motivated, and benefitted by a change of scenery, Villa would play an integral role in Atletico’s quest to win La Liga—their first since 1996.

“More short, this experience, because it was only one year, but we won La Liga after a lot of years where Atletico Madrid didn’t win.

We almost won the Champions League, too. We make it to the final, but in the last minute, we lose.”

After one final season in La Liga, David Villa became the first player signed by NYCFC. Chosen to be a pillar of the organization and the community which it represents, Spain’s all-time leading goal scorer made his way stateside.

After a quick stint at Melbourne City to keep his fitness up, Villa was ready to head up one of the most ambitious projects in MLS history.

“They gave me the opportunity to be the first player in the history of New York City,” recalls Villa.

“To come to MLS, to help MLS grow soccer in America.

“Now, three years, later, I am happy I chose this option.”

An opportunity so massive and so singular proved to be one Villa could not help but take, and in the three seasons that have followed his arrival, his footprint on the field at the Club is bigger than any other’s.

61 goals through 94 MLS appearances have defined Villa’s tenure. He’s an irresistible force on the field, and his leadership shines through week in and week out.

After winning the 2016 MLS MVP award, scoring 23 goals and leading NYCFC to their first-ever MLS Cup playoff appearances, Villa is on 19 goals this season.

His transcendent performances have landed him back on the Spanish national team—a door he once thought may have closed forever.

Will David write yet another chapter in his storied international career in Russia this summer? Don’t rule it out!

For a chance to win a signed NYCFC jersey, retweet or share the NYCFC Etihad Flight Path posts on Twitter and Facebook - see this page for rules and regulations.